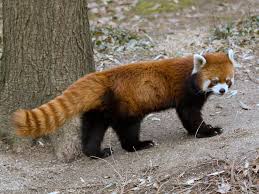 1.They are the only living member of the Ailuridae mammalian family.

2.The IUCN Red List has categorized Red Pandas as “Endangered”.